The Wonderful Wizard of Pinball 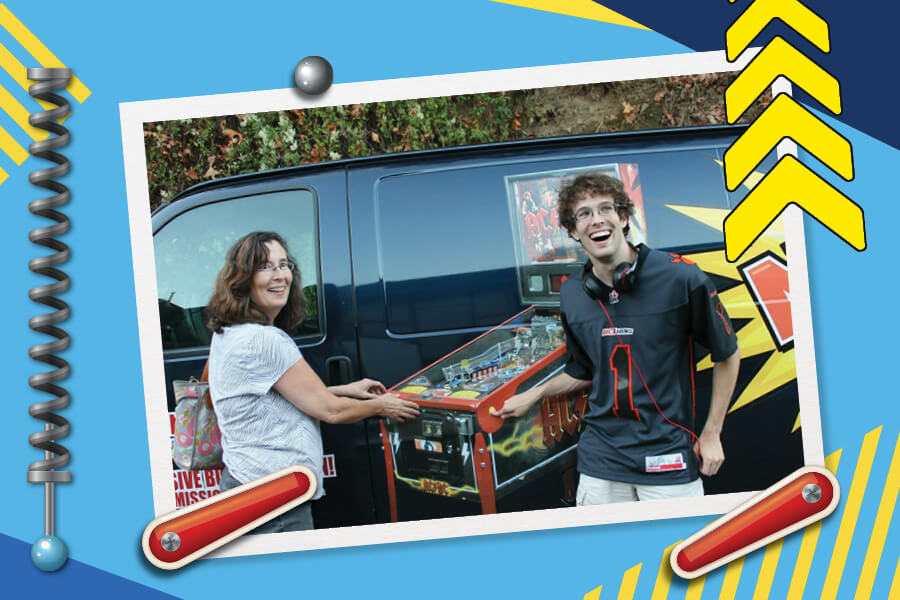 Canadian Robert Gagno (28) was diagnosed with ASD at the age of three – and discovered an abiding love of pinball at five. It was the start of a love story and journey that would change both his life, and the lives of his parents, Kathy & Maurizio Gagno. At the age of 19, Robert started playing competitive pinball. And years of training, practising, learning and persevering saw Robert win the Professional & Amateur Pinball Association (PAPA) World Championships in 2016, in Pittsburgh. Today, he is Canada’s top player and ranks among the top 10 in the world. And he’s not done breaking records and taking names just yet… Timezone spoke to Robert and Kathy.

“Believe that you can do something, even if others think you can’t.” – Robert Gagno

Robert, what attracted you to playing pinball?

RG: Lights and sounds, starting at about age five when I first saw a pinball machine in a hamburger parlour. (Says Kathy: It was a Twilight Zone machine at Wally's Burgers in East Vancouver, British Columbia. He was captivated by it and it was one of the few places where we didn’t have to worry about him bolting out the door!)

What do you enjoy most about playing competitive pinball?

RG: Meeting people and seeing people I like. Playing in new places, like Buffalo (New York) this year. Winning or doing well.

And what do you enjoy least?

RG: Line-ups and waiting times to play the tournament games, putting too much pressure on myself at times, sometimes having to travel to the places.

Is it ever difficult to play?

RG: Sometimes. I wear headphones that are noise-cancelling if it is too noisy. If it is too bright I try not to look at the lights. It sometimes takes a while to get used to a new place’s noise. It doesn’t bother me too much when I play unless another player screams.

How do you prepare for a big game? What keeps you calm?

RG: I try to sleep and eat well, and I try to relax with music or a game on my iPhone. I also try to remember that I am there to have fun

What is your favourite Pinball to play?

And the worst Pinball you've ever played?

RG: Not one in particular but I hate it when the machine isn’t set up properly or working properly, then even my favourite games are horrible to play.

Do you enjoy any other arcade games?

RG: I like a lot of Nintendo games like Mario Brothers, Mario Kart and Donkey Kong, and some car racing games. I like Tetris. I don’t know why I like them, but they can be fun too.

What projects are you currently busy with?

RG: Circus training (trampolining), and I am taking one night course per term about different computer software programs.

What are your dreams for the future?

RG: To win another world championship. To see all of the NHL arenas (hockey arenas). To get my own place one day. To get married and have a family one day maybe. To be an actor. To live a happy life.

If you could give young people one message to hold on to, what would it be?

RG: Believe that you can do something even if others think you can’t, as long as it isn’t dangerous.

“Don’t give up easily!” – Kathy Gagno

Did Robert's love of Pinball surprise you?

KG: It didn’t surprise me because I liked pinball as well growing up. In fact, one of my first photos taken with my husband when we were first dating has me wearing a “Pinball Wizard” t-shirt! Robert grew up in the age of video and arcade games, and I used to be mildly puzzled that he preferred the one or two pinball machines in a place full of other types of games, but didn’t think too much of it really. I used to think that maybe it was a way of avoiding the more congested areas of the arcades.

How did it change your lives?

KG: Both my husband and I are on the introverted side – we always had good friends, but a smaller number than a lot of people. Attending tournaments and pinball events with Robert, as well as the media attention he has received, has made us more ‘social’ ourselves, in a good way. Now a lot of our vacations are what we refer to as ‘pin-cations’, and it’s very cool that our circle of friends encompasses a wide range of ages and backgrounds. Without Robert being involved in pinball to the extent he has been, we never would have met many of the people who we consider friends, nor have some of the opportunities we have had while supporting Robert.

What were the most challenging aspects of working with and guiding a Pinball Champion - who also happened to be on the autism spectrum?

KG: In the early stages, Robert’s social skills and conversational skills weren’t nearly as developed as they are today, and early on we (me and/or Maurizio) had to be almost behind or beside him to prompt him through some of the social interactions, like congratulating someone who beat him in a match, acknowledging a greeting, or not wandering away during a conversation. In the early stages I struggled a bit, wondering whether I should explain that some of the behaviours were due to autism, or to just leave it. As in most situations, I chose to not necessarily announce it publicly, but never shied away from it either, since there are times where it may be important for the other person to know. This was a fairly short phase though. Maybe initially Robert was known as the Autistic Pinball Player, but now most people think of him as ‘A good pinball player who happens to be on the Autism Spectrum’. Ironically, as more and more players, and even non-players, know Robert now, sometimes they forget he has autism and probably wonder why he may react to something in a different way… This is temporary, too, but it is very interesting. Like any ‘skill’, Robert and many other people on the spectrum learn best through practice and breaking situations into smaller chunks of skills to learn. There are many things that we non-ASD people do that we take for granted or just kind of intuitively know what to do, and there are always new situations coming up that are confusing to Robert and where he needs some help to understand it.

What have you learned from this wild Pinball ride?

KG: It sounds clichéd, but I have learned that there are many nice people out there and the majority of ‘not nice’ people are ‘not nice’ to anyone, so it shouldn’t be taken too personally. Appearances can be deceiving so don’t judge how someone may be from how they look. Also, I find that most people are genuinely curious about autism and are happy to help Robert along if needed. For a lot of the pinball players Robert may be their first friend or acquaintance with ASD that they socialise with, so it has been a learning process for them as well. It is not uncommon for someone to say, ‘Robert has really changed since I met him’, and while that may be true, I will point out to them that they have also changed in the way they interact with him as they have gotten to know him.

Has there ever been a really difficult moment?

KG: Lots! He still occasionally has what could be called mini-meltdowns, usually when he doesn’t play as well as he thinks he should. He is his own worst enemy and when in this perfectionistic type of state can quickly become anxious. Sometimes it is difficult to de-escalate, especially if his dad or I aren’t nearby. At these times, to someone who doesn’t know him, he could appear as a poor loser, but really, he is just taking out frustration on himself. I try to use these moments as a teaching experience for him and make him realize how the anxiety and behaviour is detrimental to his own performance, as well as how it may appear to someone watching or listening.

What are you proudest of?

KG: Achievement wise, Robert winning the world championship. Effort wise, his continued curiosity about new games, goal-setting, and working hard to meet those goals, whether they are in pinball or elsewhere.

What is the key thing you learned from raising a son with autism?

KG: That there are a lot more similarities than differences, and he wants the same things most young men his age want: a loving relationship with someone, a good job with income security, independence, and opportunities.

What are your dreams for the future?

KG: That he will be able to live independently, with some outside assistance if needed, but basically on the path of his choosing.

Do you have a message for parents with children that you'd like them to hold on to?

KG: Don’t give up easily. Robert was diagnosed at a time when there wasn’t nearly the amount of information there is now. The diagnosis was only starting to be used for kids who didn’t fall in the very severe category, but was still rare. Information was limited to a few library books. We were told at one point that Robert ‘may’ learn to communicate a bit but not to expect him to read or write, and we were even given the option to put him ‘into care’. He has far exceeded those expectations and continues to surprise us with his insights and things he is able to learn!